Crowdfunding means exactly what it sounds like: funding from a crowd. When you use crowdfunding, you solicit donations from a number of people for a particular project, and, depending on the model, they may only pay if you gain the funding you need. It lets projects that can attract as little as $10 from many people go ahead; it’s the kind of thing that makes the Internet a truly inspiring tool. Kickstarter is perhaps the most famous crowdfunding site, with Indiegogo a close second, but YouTube has recently announced “Fan Funding” which allows YouTube channels to seek donations to their channels.  They probably see things the way we do—video and crowdfunding are two powerful forces that will be more powerful together. 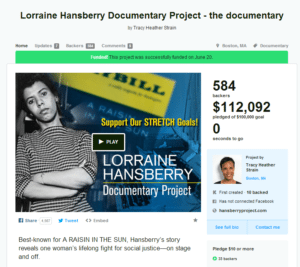 Kickstarter and Indiegogo take slightly different approaches to crowdfunding; Kickstarter employs an all-or-nothing model in which, if you don’t reach your stated goal, you get nothing. Indiegogo allows other models, in which you can get partial funding, but the fees are higher if you don’t reach your stated goal—and lower than Kickstarter’s if you do. According to Kickstarter’s own statistics as of today’s date, almost $1.2 billion have been pledged to fund Kickstarter projects and more than 64,000 projects have been funded since its founding in 2009. Indiegogo says that 9 million people from all over the world visit Indiegogo every month. No wonder YouTube wants in on the action!

We were very impressed with the Kickstarter page at the left, which showcases a video as a means of showing what documentary filmmakers Tracy Heather Strain and Randall MacLowry can do. The project has exceeded its goal of $100,000; the creators gave themselves 45 days in which to meet their goal, made their page smartly with a video front and center, and met their goals. (You can still donate if you’re interested!) While it might be a no-brainer to use a video to promote crowdfunding if you’re a documentary filmmaker (and it is!), any crowdfunding campaign can find better penetration through video.

YouTube’s Fan Funding is the logical next step from this. As YouTube describes the feature, “We’ll be adding another option for you, where fans will be able to contribute money to support your channel at any time, for any reason. A handful of creators are testing this feature on desktop and Android…. If you’re interested in trying it on your channel, sign up here.” The “Support this channel” image shows on the left on the channels testing the feature, and when you click it, you’ll get the one on the right, soliciting a modest donation. 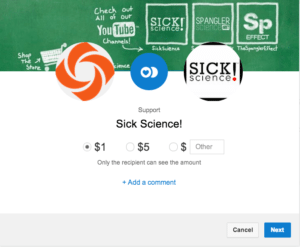 It remains to be seen whether YouTube is likely to ever put Kickstarter or Indiegogo out of business. One thing that occurs to us is that something people love about YouTube is that it’s free. Adding crowdfunding potentially disrupts that; this may open up opportunities for artsy, non-commercial Vimeo to gain new adherents. On the other hand, we’re intrigued by the possibility that nonprofits and others can raise money to keep doing their great work by creating a video that inspires.

We haven’t seen any news about how this feature interacts with the YouTube Nonprofit Program; Poynter reports that the nonprofit ProPublica has applied for admission to the Fan Funding program but not yet been accepted. Obviously this is one way for YouTube to seek to monetize its content–it collects fees on each transaction and YouTube stars will likely consider crowdfunding a reason to stay committed to YouTube. It’s also worth noting that this is a pretty different model of crowdfunding than Kickstarter and Indiegogo use. Of the eight sites in the pilot program, none have framed crowdfunding on their channels’ homepages as aimed at funding a particular project, and none have used the pledge gifts people routinely offer on Kickstarter or Indiegogo for big donations such as signed posters or other swag and privileges.

It may be that Fan Funding won’t disrupt Kickstarter or Indiegogo at all—but when the biggest name in online video does anything new, it’s a good idea to watch.

Why Add Video to Your Health Awareness Month Strategy