If you use Facebook with any regularity, you’ve probably been noticing since December the effects of Facebook autoplay–just loading a page with a video on it causes the video to play, although sound doesn’t kick in until you click on the video. It’s an eye-catching change. But what does Facebook autoplay mean for your organization’s video content? 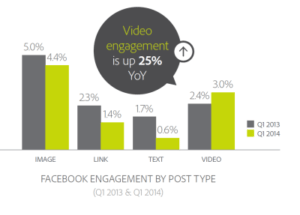 As Fast Company noted a few weeks back, “Users Actually Seem to Like Facebook’s Auto-Play Videos.” The reason they sound surprised may be that if you go looking around the web for information about Facebook autoplay, the links that pop up suggest that at least some people find it annoying. But a common principle of the Internet seems to hold true here: the people who like a feature may not talk about it—and may not even know what it’s called. But if your marketing strategy includes sharing video on Facebook, you probably want to know about autoplay and its effect on video.

Fast Company bases its opinion about these effects on Adobe’s Q1 2014 Social Intelligence Report, released April 18 and reporting on the first full quarter of the existence of Facebook autoplay, January 1-March 31, 2014. The report shows that Facebook users engaged (that is, liked, commented, or shared) with videos 25% more in the first quarter of 2014 vs. the first quarter of 2013. As the graph at the left shows, image posts received more engagement, but we suspect this may reflect the greater presence of images vs. video on the site. A second graphic is even more striking. 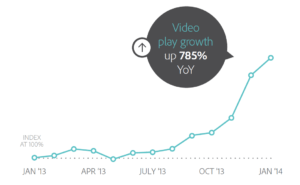 The line graph shows that video play growth exploded with the advent of Facebook autoplay. And that’s important, too, because if the people that have liked your page play your video, that means it has an impact even if they don’t like, comment, or share the video itself. Just watching has power to deliver your message. Even if it doesn’t translate immediately into action, it builds a case and perhaps will stimulate engagement in the future with your organization.

Facebook autoplay means that if a user posted a video from Instagram, the video will play without sound as soon as a user loads the page on which it appears. This essentially means that the first few seconds act as a silent teaser to watch the video. Maximizing the opportunity Facebook autoplay offers requires making sure that the beginning of your video really hooks the viewer in a visual way. You want to make sure it’s not static, so you take advantage of the eye-catching advantage of motion on the screen, and that you put your video’s best foot forward right away. If there’s a striking element to your video, you don’t want to save it for last.

Another fundamental lesson of Facebook autoplay is that Facebook implemented it because they recognize the power of video to make a site engaging and to bring users back again and again. It seems to us that Facebook’s relationship to video is evolving—that they recognize video as a likely avenue to maintain and expand their dominance in social media—and we’ll be devoting several posts over the next few weeks to the mechanics of posting video on Facebook. We hope you’ll check in.

Meantime, what applies to Facebook as a whole certainly applies to your organization’s individual page: video will expand your reach. We’d love to help you build your video presence so you can take advantage.