Here’s part 2 of our common interview concerns series, with some video interview tips on audio.

Sound is just as important to video as images—if not more. And you may be worried about how you’ll sound during the video. Many perceive their recorded voices as higher pitched. There is simple science behind this, and you shouldn’t let it ruin the enjoyment of seeing yourself on a video.  Altering your voice in any way (like speaking in a lower pitch) will only look forced. Therefore, one of the most important video interview tips is to speak normally. Speak as you usually would during the interview—everyone else will hear your voice the same way they always have.

Volume is another key part of how you’ll sound, and good audio starts with good microphones. During an interview, the most common type of mic you’re likely to see is the lavalier (shown in the image). Otherwise known as the lav, this is a small, inconspicuous mic that clips to your clothing. It’s great for interviews because it’s unobtrusive and picks up your voice with little background noise.

Your producer or technician will likely have you start speaking into the microphone to test and set audio levels. This is to set the camera or recording device so that the audio is recorded within at good volume range that will work well during editing. The camera operator can also manually adjust the levels if your volume starts to rise above the appropriate range.

When you are speaking at a podium, your producer will not have the same control over your audio and will not be able to redo a take. In this case, to sound good, it’s important not to get too close to the mic. You’ve probably heard the popping sound that a microphone makes when the speaker makes a forceful “p” sound and emits a big breath of air at the mic. Some audio problems can be fixed in post-production editing, but it’s best to start with the cleanest audio you can.

Your sound is your means of telling the story in the video and is an important consideration of an experienced producer. Tomorrow we’ll write about communicating your best message in an interview.

If MiniMatters can help you with fundraising video, association video, or other video production needs, we’d love to talk with you at 301-339-0339 or via email at [email protected]. We serve associations, foundations, and businesses primarily in Washington, DC, Maryland, and northern Virginia. 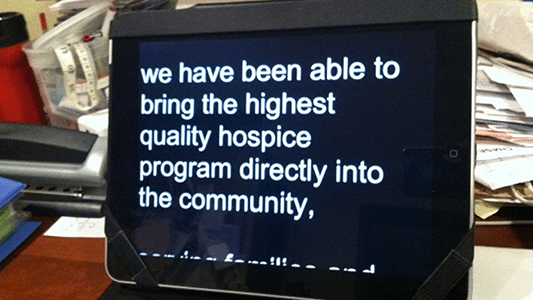