True/False Friday: YouTube is the most interesting thing about the Republican National Convention.

True/False Friday: YouTube is the most interesting thing about the Republican National Convention.

The RNC partnered with Google to make Google the convention’s official social platform and to make YouTube central to the strategy. The page looks pretty great: 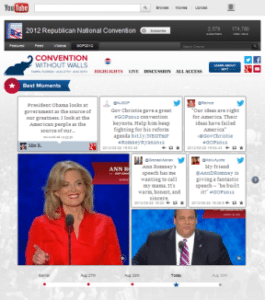 This level of customization isn’t available to the average YouTuber. The text boxes feature tweets from Mitt Romney and others; the images are videos. This sophisticated level of customization and dynamic content goes even beyond that provided on some of the best branded YouTube sites. And branded YouTube sites are available only to organizations that spend no less than $50,000 on YouTube advertising over a three month period. This implies some kind of arrangement behind the scenes between the RNC and Google, which owns YouTube—and we have to imagine that there’s a benefit in this for YouTube, too.

The RNC’s page also has a stream of comments from Facebook and and other social media sites running below the material you see in the image here. They’ve obviously invested a good deal in social media generally and in YouTube specifically.

The RNC is onto something in investing heavily in their YouTube page. Short videos are a great way to translate the traditional convention format. Conventions and conferences are in some ways collections of speeches, and those translate really well to a YouTube channel.

It’s just one more data point about how important YouTube is if you want to capture the imagination and change the world. It’ll be interesting to see how the Democrats use social media for their convention, too. Barack Obama’s victory in 2008 may well have something to do with his engagement in comparison to his opponent.

However if you want to catch a little excitement about the Democratic National Convention, you might enjoy this video:

Social media was key to the 2008 election. The party that lagged then understands that now, and it’ll probably be even more influential in the coming months.

If MiniMatters can help you improve your YouTube channel or serve your other video needs, we’d love to talk with you at 301-339-0339 or via email at [email protected].