Now that we’ve had a few weeks to recover from the elections, it’s (perhaps) possible to contemplate what your nonprofit can learn from the whole election thing.  Think about YouTube Campaigns. 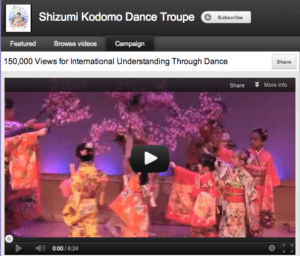 As nonprofit specialists and YouTube experts, we believe that the candidates’ desire for supporters, funds and votes might have some parallels with your own engagement with potential members and donors. Ever at the forefront, it’s no surprise that YouTube has just rolled out a new feature for nonprofits to capitalize on just that: YouTube Campaigns.

YouTube Campaigns is a new part of the YouTube Nonprofit Program that allows you to turn a group of videos into a virtual campaign. You start by naming/describing the campaign and choosing the related videos. All the videos and your channel page will now have a new “Campaign” tab showcasing the campaign. We created the campaign shown here, 150,000 Views for International Understanding Through Dance, for our pro-bono client, Shizumi Kodomo Dance Troupe.

The program’s most interesting part is the campaign goals. Nonprofits can set goals for video views or channel subscriptions (along with deadlines for them) that will show up on all the campaign pages. The goal appears as a progress bar over the video and on your nonprofit’s channel’s page, that gradually fills up as your video racks up views (or as your channel garners subscriptions). Political campaigns used to use an image of a thermometer that filled up as a campaign neared its goal. In YouTube Campaigns, instead of a thermometer you get a bar. Our client’s campaign was at about 3/4 of its goal when we took this shot. The idea is to turn average, passive viewers into active players when they’re able to help inch the progress bar along by promoting the campaign. And YouTube’s Nonprofit Program even makes that part easier by adding a button that reads “Share this campaign.” It allows for easy sharing on FaceBook, Twitter, Google Plus, Tumblr, LinkedIn, and others. 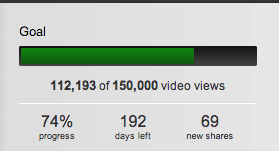 We only have one quibble with YouTube Campaigns, and Nonprofit Quarterly said it first. We hope that soon it’ll be integrated with Google Checkout so you can use it to spur on video-led fundraising campaigns by showing how much of the donation goal has been reached.

We have faith in YouTube. They’ll get that going soon. And it’s not a reason to wait. In your next fundraising or advocacy project, take a pointer from politics, and turn your viewers into promoters.

If MiniMatters can help you with fundraising video, association video, or other video production needs, we’d love to talk with you at 301-339-0339 or via email at [email protected]. We serve associations, foundations, nonprofits, and businesses primarily in Washington, DC, Maryland, and northern Virginia.