A Tribute Video Expresses Grief and Points the Way Forward

A Tribute Video Expresses Grief and Points the Way Forward

A tribute video is a great way to recognize the leaders and special people of your organization. Every organization has founders, pioneers, champions – people who make the organization thrive and spread the word to new supporters.  When one of these central individuals dies, it can leave a gaping hole in the organization. How does an organization fill that hole? How can you ensure that the legacy of that person and his or her vision continues?

A tribute video can help with healing 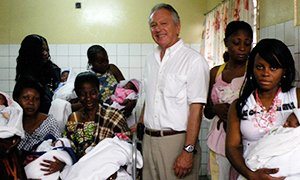 Dr. David Rimoin was a giant in the field of genetics and a founder of the American College of Medical Genetics and Genomics. His death in May of 2012 grieved many who recognized him as a visionary, admired teacher, prolific author, mentor, beloved friend, researcher and skilled and caring physician for five decades. The ACMG Foundation took up the cause of recognizing his legacy with a tribute video will raise funds for an endowment to support the David L. Rimoin Lifetime Achievement Award and provide for genetics training for promising medical geneticists.

People respond to the emotional appeal of the tribute video

The video premiered with an audience of 1,700 people at ACMG’s annual conference in March 2013 in Phoenix, Arizona. It brought tears for many audience members, and Dr. Rimoin’s family has embraced the video and shown it to dozens of friends and colleagues. Dr. Rimoin’s oldest daughter Annie, an epidemiologist, was able to show an online version of the video on a recent trip in Africa.  In November, Dr. Rimoin’s wife, Dr. Ann Garber Rimoin, will show the video as part of a major fundraising dinner. A viewer on YouTube wrote, “Thank you for the video on this soft-spoken, gentle giant in medical genetics.” This multi-channel rollout increases the impact of the tribute video and its contribution to the fundraising efforts that will consolidate Dr. Rimoin’s legacy.

A tribute video has fundraising results

With the video as the centerpiece for telling the story of Dr. Rimoin’s life and vision for medical genetics, ACMG has been pleased with the results.  The tribute video has given fundraisers a compelling tool that brings people back to the inspiration for the Endowment and why financial contributions will help keep Dr. Rimoin’s vision alive.  Other fundraising events for the Endowment will happen this fall, and bring ACMG even closer to its goal.

Are there figures in your organization whose legacy a tribute video might honor? Let us know in the comments!

MiniMatters can help you with business video, fundraising video, association video, or other video production needs. We’d love to provide an estimate through our online form, talk with you at 301-339-0339, or communicate via email at [email protected]. We serve associations, foundations, nonprofits, and businesses primarily in Washington, DC, Maryland, and northern Virginia.

We’ll be taking a blog break next week, but come on back on September 3 for a post about YouTube channels and a special announcement.